In another edition of #AskACWM, we’re looking at Confederate veterans involvement in the Reconstruction-era Ku Klux Klan. 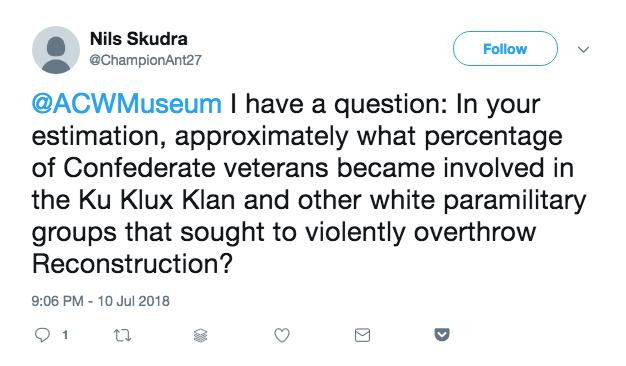 Your question, “what percentage of Confederate veterans became involved in the Ku Klux Klan…” is difficult to answer, and we do not feel comfortable making an estimation of any particular percentage.

This is chiefly because the Reconstruction-era Ku Klux Klan was a secret organization that went out of its way to obfuscate its numbers, organization, and activities. It was, after all, an extra-legal, and after the Enforcement Act of 1870, illegal.

Further obscuring an accounting is the fact that while the Klan proliferated in some places in the former Confederacy (Alabama and North Carolina, for instance), it never became a significant force in other places (like Virginia). In all likelihood, the percentage of Confederate veterans-turned-Klansmen was high in Alamance County, North Carolina, but low in Loudoun County, Virginia.

Another consideration is that participation in the enormous tide of collective and private violence from 1865 to 1871 intended to intimidate and constrain the freedom and mobility of Black men and women, and to target Republican officeholders, was often fleeting. Vigilantes of all types—Klan or not—perpetuated violence without consequence.

Demographically, it stands to reasons that a good percentage of white men in the South who participated in Klan and Klan-like violence in the decade after the Civil War were veterans, if only because more than 50% of military age men had been in service. A Congressional committee investigating the Klan in 1871 did not estimate membership numbers. One Klan member hauled before the committee, boasted that the Klan in Alabama numbered “eight to ten thousand members” while Georgia’s boasted “ten to twelve thousand.”

Contemporary historians shy from deducing membership numbers. Alan Trelease did not attempt an estimate in his classic, White Terror. Elaine Frantz Parson’s 2015 study only alludes to “thousands” of members.

But the close association of Confederate veteran status and Klan membership was as obvious to contemporaries as it is to us now. Indeed, military experience during the Civil War had equipped these men with the competence and confidence to organize and employ violence against fellow human beings. Among the first official Klansmen in Pulaski, Tennessee, were former members of the 3rd Tennessee, and known members more broadly can usually be traced back to Confederate service. Klansmen occasionally wore their old uniforms, but more often donned ridiculous costumes sometimes intended to evoke ghostly apparitions of the Confederate dead.