Whether you subscribe to superstition or not, Friday the 13th has entered our popular culture as a harbinger of bad luck (and bad movies). Eight Fridays fell on the 13th during the American Civil War. Some saw major battles, others mere skirmishes. But were these days host to specific instances of bad luck? Anyone who was wounded in the fighting or who lost a loved one might have thought so. See for yourself as we recap each day. (follow the links to learn more about that day’s events or see related artifacts from our collection)

September 13, 1861- The first Friday the 13th of the war saw inaction at Lexington, Missouri. Having bottled up the Federal forces in skirmishes, Gen. Sterling Price of the Missouri State Guard decided to wait several days for reinforcements before attacking the town. This day also saw the Battle of Cheat Mountain, in present-day West Virginia. This defeat for Robert E. Lee was nevertheless important enough for the 1st Tennessee Infantry to be included on their commemorative ribbon.

December 13, 1861- A few months after Cheat Mountain, a battle took place on the slopes of Allegheny Mountain in western (now West) Virginia. Despite inconclusive results and similar casualty levels, Confederate Colonel Edward Johnson received the nickname “Allegheny” in recognition of his leadership during the battle.

June 13, 1862- This day could easily be viewed as unlucky, and certainly embarrassing for George B. McClellan, when J.E.B. Stuart decided to ride completely around the Union army instead of turning back the way he came. The ride gave Robert E. Lee important information about Union positions and numbers.

February 13, 1863- On this day, the ironclad USS Indianola seemingly had good luck as she ran past the Vicksburg batteries on the Mississippi. That luck ran out just eleven days later though, when she was forced to surrender after being run aground on the Red River by two Confederate ships.

March 13, 1863- This Friday the 13th witnessed one of the worst home-front tragedies of the war, when the Confederate States Laboratory on Brown’s Island exploded after an accident in a cartridge-making facility. More than forty people died, mostly young girls who worked at the laboratory. More than twenty others were injured. You can chat with a historical interpreter portraying Mary Ryan, the girl who caused the explosion, when our Historic Tredegar summer programs begin again after Memorial Day. 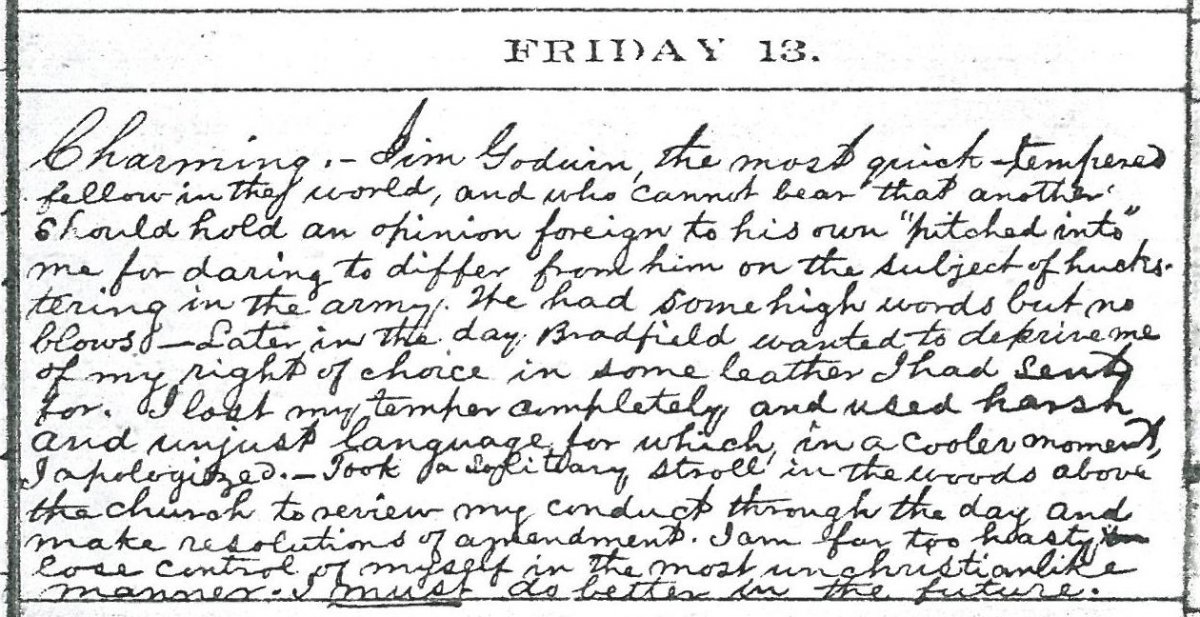 November 13, 1863- Was it bad luck or bad behavior that forced James Thomas Petty to take a solitary stroll and make resolutions of amendment? His diary entry from that day explains:

Charming. – Jim Godwin, the most quick-tempered fellow in the world, and who cannot bear that another should hold an opinion foreign to his own “pitched into” me for daring to differ from him on the subject of huckstering in the army. We had some high words but no blows – Later in the day Bradfield wanted to deprive me of my right of choice in some leather I had sent for. I lost my temper completely and used harsh and unjust language for which, in a cooler moment, I apologized. – Took a solitary stroll in the woods above the church to review my conduct through the day and make resolutions of amendment. I am far too hasty to lose control of myself in the most unchristianlike manner. I must do better in the future.

May 13, 1864- This Friday the 13th probably saw more action than any other. The lines were shifted at Spotsylvania Court House while the lines were tested at Resaca, Georgia and Drewry’s Bluff, Virginia. The retreat from the Red River Campaign continued and the bombardment of Fort Sumter was renewed.

January 13, 1865- The final Friday the 13th of the war contained the resignation of John Bell Hood, and the landing of troops outside Ft. Fisher, which would fall two days later. Michael G. Glennan was among the troops who surrendered.

Did any of these experiences strike you as bad luck? Or were the misfortunes of these eight days simply the results of war, like any other day during those four years? We’d love to hear your thoughts in the comments.