Has there always been a “smooth transfer of power” following presidential elections?

As Americans, we take for granted a relatively smooth election process in which losers in elections concede to the winners. Recent statements made by one of the presidential candidates challenge that notion, however, and beg the question: Have American presidential elections always resulted in a smooth transfer of power from one candidate or party to another?

The answer is, generally yes with one very significant exception: the election of 1860.

Through our history there have been contentious presidential campaigns and challenges to the electoral process. The most recent of these was the election of 2000, in which Democratic candidate Al Gore and Republican candidate George W. Bush faced off for the presidency.

“It was the election that went on forever—or at least that’s what it seemed like. In the race between Al Gore and George W. Bush, it all came down to the outcome in Florida: TV networks initially announced the state had gone in Gore’s favor, then said it was too close to call before finally calling it for the Texas governor. With just a few hundred votes separating the candidates in Florida, the lawsuits and recounts began in full force, including heated disputes over confusing or improperly punched ballots, missing names on voter rolls and multiple requests for ID from minority voters,” writes Sarah Pruitt in an article on History.com. “Five agonizing weeks after the election, the U.S. Supreme Court had the final word, ruling by a narrow majority to stop the recount ordered by the Florida Supreme Court on the grounds it violated the constitutional principle that “all votes must be treated equally.” Bush, who won 30 states (counting Florida) and maintained a razor-thin five-vote majority in the electoral college, would be the first candidate in 112 years to win the presidency without prevailing in the popular vote (he trailed Gore by more than 500,000 votes).” 1

On Dec. 13, 2000, Gore conceded defeat and called for national unity, saying “we put country before party.” Following the 2004 election, candidate John Kerry made a similar pronouncement in his concession to Bush. “Whether or not our candidates are successful, the next morning we all wake up as Americans,” he said. “And that is the greatest privilege and the most remarkable good fortune that can come to us on earth.” 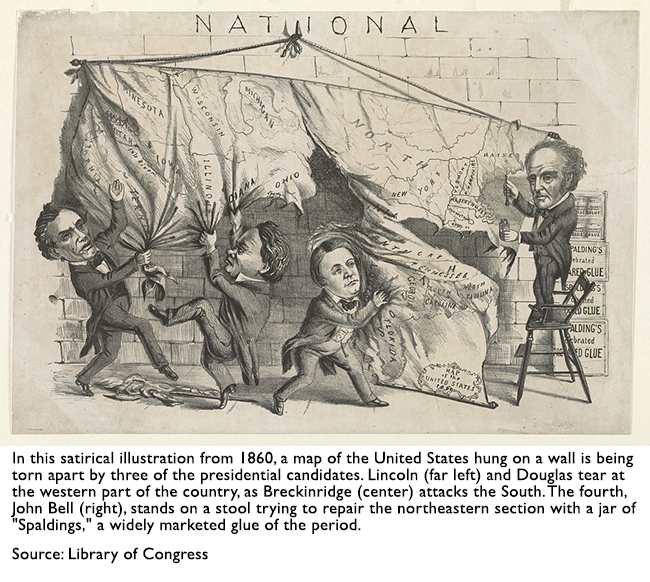 But what of the American Civil War? Many believe the election of 1860 was the most contentious in our history, and that the results led to the Civil War.

“The presidential election of 1860 wasn’t just contentious—it tore the nation apart,” continues Sarah Pruitt in her History.com analysis. “Abraham Lincoln, the chosen nominee of the fledgling Republican Party and a steadfast opponent of slavery, wasn’t even on the ballot in most Southern states. While the Democratic Party went with Lincoln’s Illinois rival, Senator Stephen Douglas, as their candidate, the southern branch of the party defected, choosing sitting Vice President John Breckinridge as its candidate. Sen. John Bell of Tennessee rounded out the race on the ticket of the new Constitutional Union Party. Lincoln won only 40 percent of the popular vote but took most of the electoral votes in the North, along with California and Oregon. Breckinridge won the electoral votes in most of the South, along with Maryland and Delaware; Bell won Tennessee, Kentucky and Virginia, while Douglas captured only Missouri, despite finishing second in the popular vote. Just weeks after Lincoln’s victory, South Carolina voted to secede. Six more Southern states followed, forming the Confederate States of America in February 1861, with Jefferson Davis as president.”1

The Deep South states clearly rejected the verdict of the presidential election, and decided to leave the Union before Lincoln and his Republican Party – a party whose raison d’être was opposition to the spread of slavery into the Western territories – took office.

But did secession prevent a “smooth transition of power” from one U.S. president to another?  The losing parties did not contest the election. Neither did the losing candidates.  Southern Democrat John Breckinridge remained vice president of the United States until Abraham Lincoln took the oath of office on March 4, 1861, then resumed his seat – in the same chamber – as U.S. Senator from Kentucky, where he remained until August 1861. Northern Democrat Stephen Douglas – Lincoln’s political nemesis – pledged his loyalty to the Lincoln administration in the face of the growing sectional crisis.

No one tried to prevent Lincoln from assuming the presidency after the 1860 election. The Southern states, however, denied Lincoln the opportunity to exercise his presidential power over them. Their action confronted Lincoln with a challenge: would he be content to become president of part of the Union?  Lincoln responded to this challenge in his March 4, 1861:

“I therefore consider that, in view of the Constitution and the laws, the Union is unbroken; and to the extent of my ability I shall take care, as the Constitution itself expressly enjoins me, that the laws of the Union be faithfully executed in all states….In doing this, there needs to be no bloodshed or violence; and there shall be none, unless it be forced upon the national authority….In your hands, my dissatisfied fellow-countrymen, and not mine, is the momentous issue of civil war.”

The transition of power from Democrat James Buchanan to Republican Abraham Lincoln was remarkably smooth. The question fraught with potential violence concerned the shape of the Union over which Lincoln would preside. That drama played out in the six weeks after Lincoln’s inauguration – and in the four years after that.

In a coming post, we’ll take a closer look at the election of 1860. In the meantime, let us know if you have questions about the 2016 race and connections to the American Civil War.