On this day in 1920, F. Scott and Zelda Fitzgerald visited the “Confederate Museum,” now the White House of the Confederacy. Their entry in the Museum’s guest book for that date, signed in Scott’s hand as “Mr. and Mrs. F. Scott Fitzgerald,” was just discovered last week in the Museum’s collections.

The Fitzgeralds’ visit to the museum was a stop on a road trip from their home in Westport, Connecticut, to Zelda’s family home in Montgomery, Alabama. This trip—purportedly spurred by Zelda’s craving for biscuits and peaches, unsatisfied in Connecticut—later served as the basis for F. Scott Fitzgerald’s “The Cruise of the Rolling Junk,” a travel piece which was serialized in Motor magazine in 1924.[1]

The Fitzgeralds in their car.[2]

In “The Cruise of the Rolling Junk,” Fitzgerald recounts the absurdities of their eight day, 1,200 mile journey at a time when automobiles were new and road travel even newer.[3] The car—a 1918 Marmon dubbed “the Rolling Junk—” is unreliable at best, breaking down several times throughout their trip. Car trouble was not the only obstacle they encountered. They were nearly robbed by highwaymen. They were ticketed by a policeman for driving at the incredible speed of seventy miles-per-hour. The locals regarded them with suspicion, especially when Zelda was wearing her knickerbocker suit. 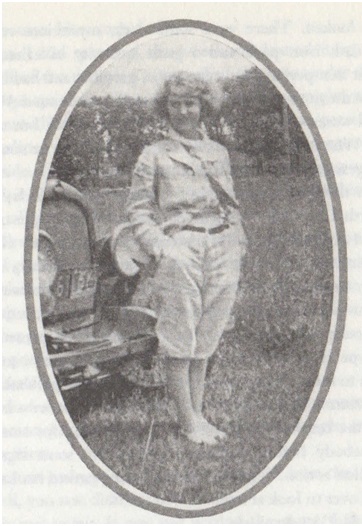 Zelda Fitzgerald wearing pants, a scandalous wardrobe choice for a woman in the 1920s.[4]

Worst of all, they did not get to eat any peaches or biscuits. “The joys of motoring are more or less fictional,” Zelda wrote to a friend.[5] Nonetheless, their trip, disastrous as it was, is significant for being one of the earliest great American literary road trips. True to this tradition, “The Cruise of the Rolling Junk” is just as much about the places they drove through as it is about the drive itself.

One of these places was Richmond. While Fitzgerald’s descriptions of Richmond itself consist mostly of complaints about the “unbelievable heat and humidity,” (The Richmond Times-Dispatch describes that day as the second hottest day of the season, with temperatures reaching 93.5 degrees.[6]), he offers a more detailed description of their visit to the museum:

We visited the Confederate museum and pored for an hour over shredded battleflags and romantic sabres and grey uniform coats, and, as we passed from room to room, the proud splendor of each state’s display was dimmed only a little by the interminable lists of living women who had managed in some way to get their names linked up with these trophies. The trophies needed no sponsoring by the Miss Rachael Marys and Mrs. Gladys Phoebes whom one pictured as large-bosomed and somewhat tiresome old ladies engaged in voluble chatter upon their ancestors in the sitting rooms and boarding houses of Macon, Georgia.[7]

Fitzgerald’s romanticized description of the Confederate Museum are reflective of the museum at the time, as it was much more like a shrine to the Confederacy than the American Civil War Museum is today, where we strive to examine the Civil War—and the Confederacy—from multiple historical perspectives.

“The Cruise of the Rolling Junk,” as well as the sentimentality of the Confederate Museum, illustrates the extent to which the Civil War still loomed over the Southern landscape in the early twentieth century. As the Fitzgeralds advanced farther South, the Civil War became a central motif in their travels. They met a “garrulous gasoline dispenser” who claimed his father fought in the Battle of Fredericksburg.[8] Finding the drive into Richmond confusing, “set behind impregnable barriers,” Scott wrote: “I began to think that the defenses erected for the crisis of 1865 had never been removed and were still defiantly repelling the Yankee invader…”[9] Zelda herself had deep familial ties to the Confederacy, and when they arrived at last in “Zelda’s native state” of Alabama, Scott described it as “the cradle of the Confederacy, the utter heart of the old south.”[10]

An advertisement for the Confederate Museum in The Richmond Times-Dispatch, July 25, 1920.[11]

Ironically, a brief review of F. Scott Fitzgerald’s first novel, This Side of Paradise, appears in the Richmond Times Dispatch on July 25th, 1920, one day after their visit, with no mention of his recent presence in the city.