Classical themed decorations based on Greek and Roman mythology, so adored by the Victorians, are seen throughout the house. In a previous post we wrote about the goddesses of the West Parlor that so enthralled the Davis boys. This time we move to the Center Parlor where Cupid and Psyche await us.

Cupid’s mother, Venus (seen on the West Parlor fireplace), jealous of Psyche’s beauty and the unsanctioned marriage to her son, puts her through a number of trials before Cupid and Psyche are finally reunited with the blessing of none other than Jupiter himself. This story has everything: lust, jealousy, envy, broken trust, and revenge. Just the sort of things the Victorians craved. 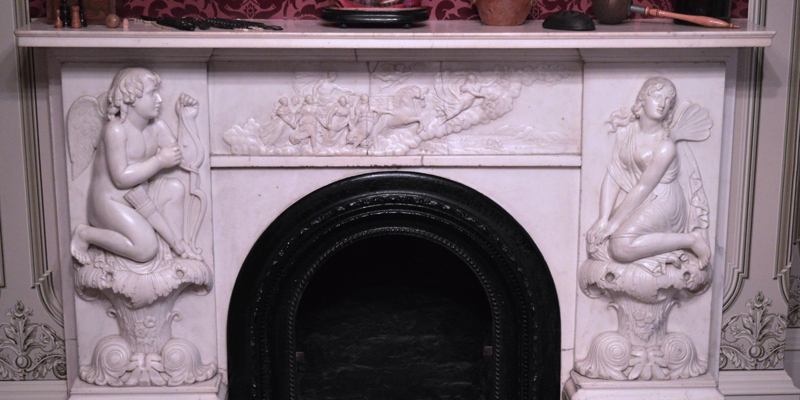 The marble relief carvings on the fireplace in the White House’s center parlor could be considered almost quaint and childlike. The original story, which finds Cupid wounded and pining away for Psyche who is crawling through the underworld, is anything but quaint. On the fireplace, Cupid, especially, is depicted as the pudgy boy seen on Valentine’s Day cards, not the mature son of the goddess Venus who clandestinely takes Psyche into his bed.

Opposite him, Psyche, looking like one of Shakespeare’s fairies from Midsummer Night’s Dream, gazes faun-like into the ether. She is often shown with butterfly’s wings, a symbol of endurance, hope, and the human soul. Cupid, of course, is never without his bow and quiver of love-inducing arrows. Together they symbolize immortal love, regardless of what Venus thinks about it.

The Carrara marble mantel was purchased in the fall of 1818 by John Brockenbrough, first owner and builder of the house, from General John H. Cocke, who commanded Virginia militia during the war of 1812. The mantels were originally intended for use in Cocke’s home, Bremo, but they proved too small for the fireplaces, so he sold them to Mr. Brockenbrough.

Learn more about the political connections and influence of John Brockenbrough and the other pre-war owners of the house at our House 200 lecture Saturday, January 13.