“What are these doors?” It is a question that comes to us with some degree of regularity in the Entrance Hall on White House of the Confederacy tours. 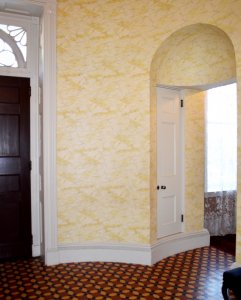 What are they indeed? They can’t possibly open into a room. Perhaps they lead to a secret passage or hidden stairway! Almost certainly this is the hope, unexpressed but longed for, within this question.

Unfortunately the answer is really very simple and much more mundane. They are closets. How they got there, however, is another matter.

The Entrance Hall is oval today but this was not the case when the house was built. At that time, the Entrance Hall was a rectangle like the other rooms in the house. The home’s original owner, Dr. John Brockenbrough, decided soon after occupying the house to create an oval Entrance Hall. This was done by building curved walls on the east and west side of the space.

On the south side of the hall, on either side of the Parlor doors, Brockenbrough placed niches for the statues of Comedy and Tragedy. These figures from Greek Drama were placed in their spaces between 1825 and 1830 and, except for a brief trip to the conservator in 1987, have been standing there ever since. 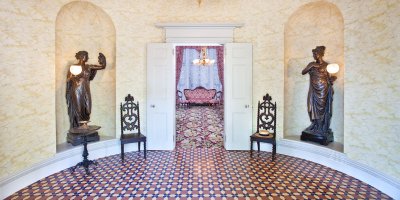 There wasn’t that kind of space on the north side of the house, on either side of the front doors. Still, there was a small, open area was created behind this new, curved wall. What to do?

The solution; put a door in the wall and have a bit of extra closet space in the Entrance Hall. We know nothing about the interior configuration of these closets. They most likely retained the shape of the original wall behind them. We also don’t know what type of storage or stowing amenities may have dwelt there. They were closed in when the house was used as a school (1870-1890) and were discovered by architects during the restoration.

I am sure this must be a bit disappointing to our visitors. A doorway to a secret passage or stairway would be a wonderful bit of historic home romance. But alas, here we have simple closets created by placing a curved wall inside a rectangle.

Perhaps that secret passage awaits discovery, somewhere within the walls of our magnificent, historic residence.