This week, two of our staff members find playful parallels between the White House of the Confederacy and today’s headlines.

What do you think of the First Lady? She certainly garners a variety of responses.

She is a well-educated woman who is outspoken and passionate about a variety of topics, and she can be darn entertaining to boot. Some people seem to really love her. Others see her differently. Some call her “brilliant,” and “strong.” Others call her, well, something else.

Yeah, that Varina Davis was something. Oh wait, you thought I was talking about someone else? 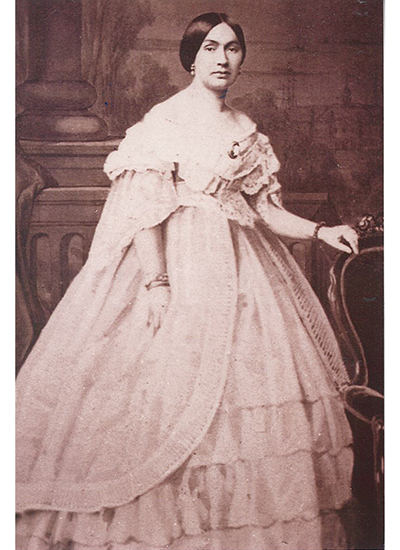 Many found Mrs. Davis to be a wonderful conversationalist. Civil War Diarist Mary Chesnut wrote of her, “When she is in the mood, I do not know so pleasant a person. She is awfully clever-always.”

Columbia University’s John W. Burgess was also a friend of Varina’s and noted, “Her powers of conversation and description were superior to those of any other woman I have ever known.”

She also had her critics. Irish MP Thomas Conolly said Mrs. Davis, “…is a great talker and very bitter. She is calculated to damage any cause however good. I went several evenings to pay my respects to Jeff, who commanded my respect but always avoided the tigress.”

Perhaps the greatest broadside was fired from Richmond newspaper editor Edward Pollard. In a post war piece Pollard wrote, “It is surprising that Jefferson Davis, a man of his fine nervous organism, should have fallen under the dominion of a woman, who was excessively coarse and physical in her person, and in whom the defects of nature had been repaired neither by the grace of manners nor the charms of conversation; …a woman loud and coarse in her manners; full of social self-assertion; not the one of her sex who would have been supposed to win the deference of a delicate man like Mr. Davis.”

One of our challenges, as historical interpreters at the White House of the Confederacy, is encouraging visitors to think about history as something that is constant, something that is always going on around you. The topics and difficult issues like we encounter each day have been encountered and experienced all through our nation’s history.

Whether it is a controversial First Lady or a difficult issue that divides us deeply as a people, historical interpreters at the Museum strive to have our visitors think about our nation’s history as something that is fluid, messy and constant, and realize that nothing is ever inevitable.

Today we are going through a controversial Presidential election, just like the one in 1860. We face difficult issues, just as Americans did in 1860. We hope that you will leave your experience at the White House of the Confederacy – or any of our sites – realizing that those folks in 1860 were not all that different from us – thinking and working hard to choose a leader, and making difficult decisions about what kind of country we are going to be.

It’s not what you think.

In her memoir of her husband, Varina Davis recalled her family’s evacuation of the Confederate executive mansion. “All women like bric-á-brac, which sentimental people call their ‘household goods,’ but Mr. Davis called it ‘trumpery.’”  The now-obscure word “trumpery” derives from a Middle English word, “tromp” (to decline) and means attractive articles of little value.

“I was not superior to my sex in this regard,” Varina Davis continued. “However, everything which could not be readily transported was sent to a dealer for sale, and we received quite a large draft on a Richmond bank as the proceeds, but in the hurry of departure the check was not cashed, and I have it now.”

Among the “trumpery” Varina Davis gave away or sold in the weeks before leaving Richmond in late March 1865 were English Parian ware (soft porcelain) figures of Perseus and Andromeda. She gave them to a Richmond friend, Mrs. Robert Howard. After Mrs. Howard’s death, her brother, Confederate veteran Dr. J. R. Gildersleeve, donated them to the Museum in 1918.

Perseus and Andromeda are now, once again, among the bric-á-brac – what Jefferson Davis would call the “trumpery” – adorning the walls of the restored White House west parlor.