On October 1, 1872, Richmond’s Central School opened with 11 teachers and approximately 600 students – all of them white in a school system that was segregated racially from the start. Richmond and other Virginia localities did not have any kind of public school systems before Reconstruction, so the opening of Central School was remarkable in itself. What made the school more remarkable was the building it occupied: a 44-year-old mansion that seven years earlier had been the White House of the Confederacy. 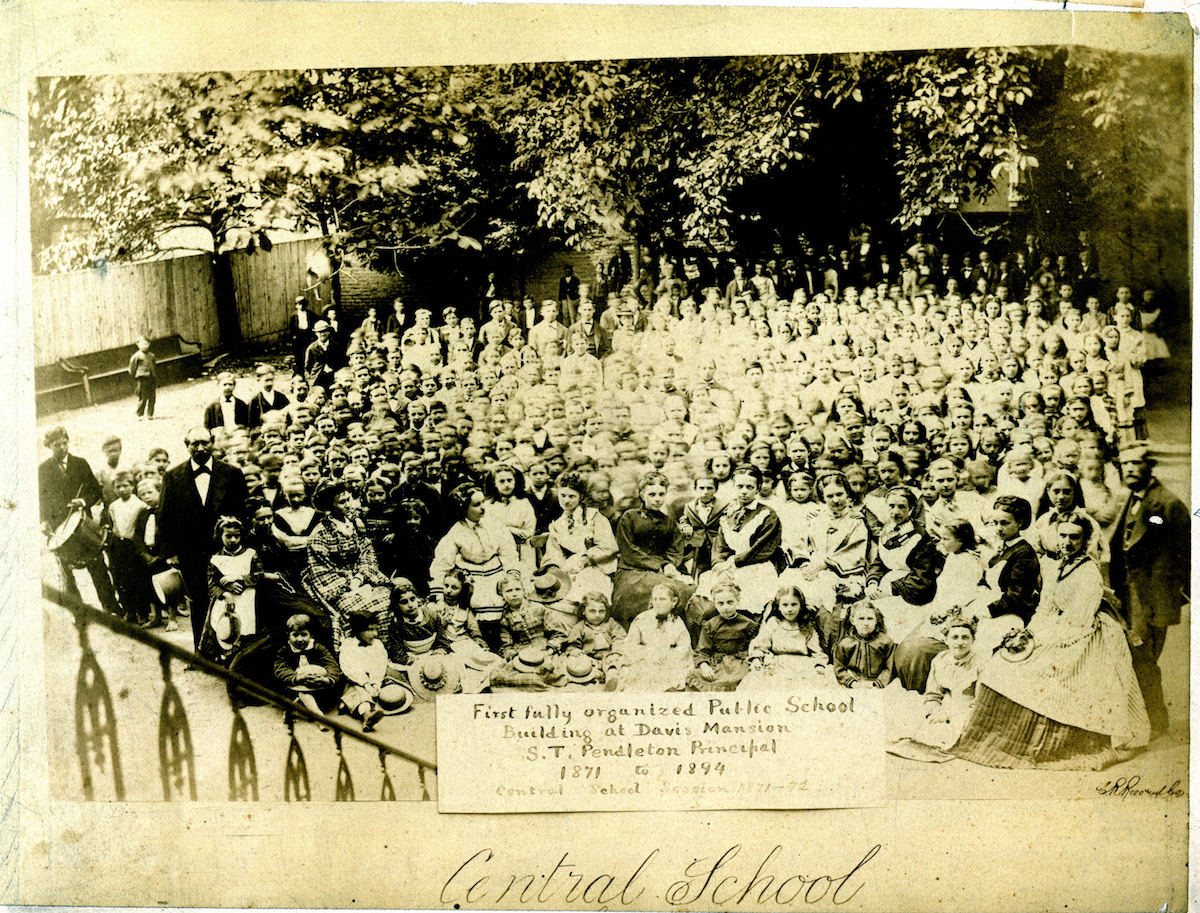 The students, teachers, and principal of the inaugural Central School class (1871-1872) posed for this group photo by Charles R. Rees in the enclosed yard behind the building’s south portico.

What was it like going to school in the former Confederate executive mansion?  A few accounts dating from the 1930s provide glimpses. George N. Wilson of Roanoke, Virginia, wrote to the Richmond Times-Dispatch in October 1933, inviting “old Centralites” to recall “the days of their childhood and early youth spent within the portals of old Central School.” Wilson “visualized” the several classrooms in the “outer building” and in the basement.

He then took his readers “upstairs on the first floor where Miss Fanny Blake took you under her wing. Those long glass windows that could be raised for entrance, and the heavy sliding doors that led into center hall.” A decade before Wilson and his playmates trod those rooms, they had been the center of the Confederate executive mansion’s social life.

As a student’s career progressed, he moved upstairs to what had been the private rooms of the Confederate president and his family: “On your way to Miss Annie Pleasants’ on the second floor. When you next moved it was to Miss Alice Eubank and Miss Budd followed; going on up both stairs and grades to meet Miss Sallie Wilkinson, who had been changed to a higher grade.”

E. Willard Sweeney, who started at Central the year it opened, sent a long account of his years at “dear old Central School” to the Richmond News-Leader in 1938.

“Upon arriving at the late abode of Jefferson Davis, our class was assigned to the ‘A-B-C’ class, which was located in what had been the kitchen of the White House – a building east of the mansion,” Sweeney began. “Joining an awe-stricken line of tots, I now marched from the main building across a well brick-paved courtyard to our new class room to be greeted by our new teacher – Miss Hilliard. Her face wreathed in a sweet smile, Miss Hilliard gave a pat and kind word to each as we filed into the room.

“Hardly becoming acquainted with my new quarters, I recall myself glancing out of a rear window and observing a steep hill, dotted here and there by trees. At this sight my childish enthusiasm knew no bounds, especially on being informed this was the big boys’ secondary playground.

“At recess curiosity caused me to further explore the surroundings. I found that the courtyards was the playground for our class and the girls whose class rooms were in the stable. At the south end it had a high plank fence and at the northern extremity were steps to a gate in a lattice fence separating this yard from the stableyard.

“Next I timidly crept to the gate in the high fence at the south end separating our yard from the boys’ main playground. One short look through this gate and I was counting the days before I would be a big boy and enjoy this huge recreation yard. Memory also brings to my vision several steps and a platform at the west end of [the] boys’ yard leading to a gate opening on the large girls playground, which formerly had been the flower garden of the White House. Over the top of the fence separating these yards I observed goodly portions of several very large trees. Among them were two 150-year old horse chest-nuts, a live oak and an English walnut. Turning, I glanced to what had been the slaves’ quarters. These had become the home of our janitors – Henry and Paul.

“Next year our entire class was promoted to the stable – a building adjoining and north of the kitchen. Here we found two class rooms. We boys were told our new playground would be in the stableyard and the wide runway leading from it to the larger boys’ secondary yard. We were especially cautioned not to throw rocks up the huge honeyshuck tree in the stableyard.

“For a day or so we poor youngsters had great difficulty in finding out whose teacher was who, as the teachers of the stable classes were twins – Miss Serena and Elexzena Hutcheson…. After being in charge of these two excellent teachers for a full session, we were ready to enter the White House proper.

“It was with interest that I entered the room of Miss Julia (?) Hicks, whose class was in the east end of the basement of the mansion. My next promotion placed me in charge of sweet little Miss Alice Lee, whose room was also in the basement – northwest corner. From here I advanced one flight up to the first floor, with Mrs. Thomas (?) Bott as my patient and positive instructress.

“Next year found me climbing to the second floor to be enrolled in Miss Lou (?) Dixon’s class; and didn’t we bad boys find that very small lady a “two-fister.” This efficient teacher promoted our class next door to Miss Ezekiel, whose room was to rear and dead center of second floor, overlooking the girls’ playground. When the horse chestnut trees were clothed with their beautiful white and pink blossoms and humming birds were fluttering at many of the buds, our good teacher had just cause for freely using her hands, strap or ruler. It appeared as though every he-boy was an expert with a gravel-shooter.

“The following year I was in Miss Jennie Wigglesworth’s class, which occupied the southeast corner of the second floor. While up to now I had never been a teacher’s pet or a red apple toter to curry that favor, I found Miss Wigglesworth “the apple of my eye” both as a disciplinarian and an exacting instructress. After her careful polishing, she sent us back to the main floor to Miss Morris’ class – the last step before entering high school….”

In 1890, the school board declared the house “in bad condition and unfit for school purposes.” The city acquired an adjacent lot for a new school, and, on June 3, 1894 – the 86th anniversary of Jefferson Davis’s birth – turned over the deed to his former executive mansion to the Confederate Memorial Literary Society, which gave the building new life as the Confederate Museum.