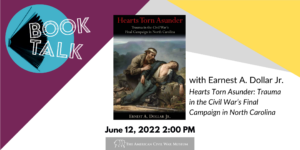 This war’s final campaign in North Carolina began on April 10, 1865, a day after Appomattox. More than 120,000 Union and Confederate soldiers were still in the field. Thousands of paroled Rebels added to the chaos by streaming into the state from Virginia. Grief-stricken civilians struggling to survive in a collapsing world were caught in the middle. Discover the psychological experience of these soldiers and civilians during the chaotic closing weeks of the war.  Durham, North Carolina native Ernest A. Dollar…

Victim-activated landmines were used on a widespread basis for the first time in the American Civil War. Discover how these "weapons that wait" transitioned from “tools of cowards” to an accepted form of warfare.