The Museum has a rich history of groundbreaking exhibitions at each of our locations. Please see the list below for some of the topics explored. 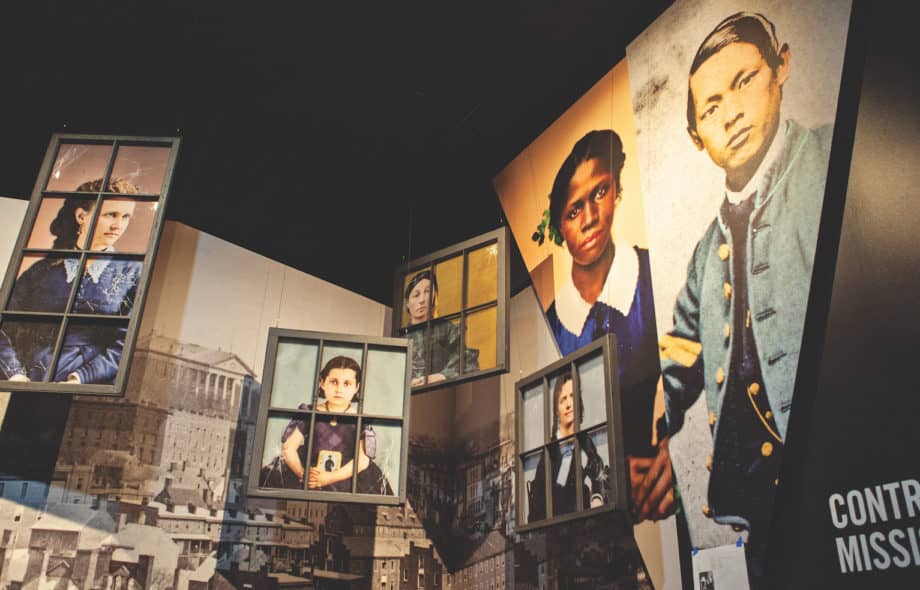 A People’s Contest: Struggles for Nation and Freedom in Civil War America

The core exhibit at the Historic Tredegar location features hundreds of original artifacts, dynamic theater experiences and compelling imagery. Visitors will be able to explore, understand and feel the dramatic story of the American Civil War and its legacies.

From the moment the new Confederate States moved their capital to Richmond, Virginia in late May 1861, capturing the city became a primary objective of United States armies. Richmond was the industrial and political hub of a new nation, the destination for conscripted and impressed soldiers, white and Black, and a place where wounded and sick men either recovered or died. In these ways, Richmond is unique in American history.

This temporary exhibit tells the story of how the United States’ decision on how to pay off the Civil War transformed the relationship between government, the economy, banks, and citizens.

The Confederate’s plans for expansion through technology and engineering were ambitious and required global alliances. Met with resistance across the world, their grand plans would not be realized.

Southern Ambitions is presented in both English and Spanish

House of the Lost Cause

White House of the Confederacy

Through this exhibit, the American Civil War Museum explores the development of the Lost Cause and its complexities, with an awareness of how current culture was affected.

Enacting Freedom: Black Virginians in the Age of Emancipation

In the age of Emancipation, freedom was more than just a word. Explore how African Americans from local Virginia communities experienced – and defined – freedom after enslavement, and how their experiences connect to our lives today.

This special exhibition explored the daily life of the Confederate soldier when not in battle. Little of a soldier’s time in the army was actually spent in combat. The majority of an army career was spent in camp, on garrison duty, or marching from one camp or garrison to another. Soldiers occupied their time learning a strange new regimented lifestyle that was so different from the civilian one they had just left. The average soldier spent more time fighting disease and the monotony of camp life than he did fighting the enemy. “Between the Battles” used artifacts, documents, letters, and photographs to trace the daily life of the Confederate soldier.

Virginia and the Confederacy

This exhibit examined the Civil War years as a pivotal time in Virginia’s history. Virginia was the keystone of the Confederacy with the largest white and black populations, the largest industrial base, and an important and symbolic tradition of leadership in national affairs. It was the scene of more battles and more deaths than any other state. Highlights of the exhibit included a signed copy of Confederate General Robert E. Lee’s General Order No. 9; the original Great Seal of the Confederacy; and the swords of General J.E.B. Stuart, his father-in-law General Philip St. George Cooke (USA) and his brother-in-law General John R. Cooke (CSA).

Art of the Confederacy

This noteworthy exhibit highlighted the art created during the wartime years as well as post-war pieces that capture the spirit of the “Lost Cause” through paintings, prints, photography, and sketches. This rare and intimate look at the Confederate south featured Conrad Wise Chapman’s deftly executed oil paintings of Charleston Harbor, and William Ludwell Sheppard’s nostalgic and idealized watercolors of the common soldier, and unique sketches by soldier artists produced in the field.

The story of the men, ships and operations of the Confederate Navy was told through objects, photographs and documents in The Museum of the Confederacy’s permanent collections and selected loans from other museums and private collections. Many flags, swords, portraits, paintings of ships, ship models, telescopes, ship logs revealed the extraordinary tales of this unheralded but surprisingly effective navy. The Museum of the Confederacy gratefully acknowledges the generosity of Don Wilkinson, descendant of Cdr. John Wilkinson, commander of the blockade-runner Robert E. Lee, for making this exhibit possible.

Although battles and leaders often dominate the story of the Confederate States of America, military victories were merely the necessary means of achieving the desired end: independent nationhood. The question is often asked: did the Confederate government and the Southern people actually succeed in creating a nation? Using the Museum’s rich object, photograph, and document collections, this exhibit examined the South’s government and diverse society and the peoples’ efforts to create and maintain a new nation in the midst of a war for independence.

The Confederate Spirit Valor, Sacrifice, and Honor Legends in Gray: The Paintings of Mort Künstler

Original paintings by the popular modern artistic interpreter of the Confederacy complemented the debut of a new print featuring the Confederate White House.

Drawing from the Museum’s own rich collections and borrowing from several public and private collections, this was the largest exhibit ever devoted to the life and career of Robert E. Lee. Through generous use of personal possessions, photographs, letters, and quotations, it introduced visitors to the man whom his West Point classmates called the “marble model.”

A display of highlights from the Museum’s North Carolina collection was created in conjunction with the annual fund-raising ball.

“Every Kind of Wound and Disease”: Hospital Life Within the Confederate Medical Department

A surgical kit serves in most Civil War museum exhibits to evoke the medical history of the war. This exhibit displayed not only a wide variety of surgical instruments, but also artificial limbs, stretchers, uniforms and other possessions of medical personnel, letters, official records and documents, and photographs to tell the stories of Confederate hospitals, the people who worked in them, and the men whom they treated.

Lost Daughter of the Lost Cause: Varina Anne Davis

Commemorating the 100th anniversary of the death of “Winnie” Davis, who was born in 1864 in the Confederate White House and became an enormously popular symbol of the South, this exhibit included personal items borrowed from Beauvoir (the Jefferson Davis Shrine) and the Confederate Memorial Hall in New Orleans.

A display of highlights from the Museum’s Texas collection was created in conjunction with the annual fund-raising ball.

A People Apart: The American South and the Civil War

The social history of the Confederacy was presented through highlights of the Museum’s permanent collections.

A Kind of Nobility: The Kentucky Orphan Brigade

Significant loans from descendants of veterans complemented the Museum’s own collections to tell the story of Kentucky’s most famous Confederate troops.

A display of highlights from the Museum’s South Carolina collection was created in conjunction with the annual fund-raising ball.

With the assistance of two National Endowment for the Humanities grants, the exhibition took what often seems to have been a conflict of only men and brought to light the crucial role of southern mothers, wives and daughters in the creation, fighting and ultimately the healing of the Civil War.

The Confederate Challenge: A Quiz Exhibit

Rare and largely unseen objects and artworks from the Museum’s collection provided visitors a stimulating environment to test their Civil War knowledge.

Observations from the Field: A New Perspective

In the Shadow of Ruins: Mourning in the Civil War South

Visitors were treated to a reprise of the popular 1980s exhibit on mourning. Read more about mourning in the publication that was designed to accompany the 1984-85 exhibition “Women in Mourning.”

April 1865–April 1995: An Exploration of the Confederate Legacy

Supported by the Virginia Foundation for the Humanities and Public Policy, this exhibit used flags, objects, documents, and audio-recorded quotations to explore the myths, realities, and significance of Richmond’s last days as the Confederate capital.

This exhibit created by the Museum of American Financial History in New York explored the visually rich and complex world of nineteenth-century finance.

Mosby and Sheridan in the Valley

Uniform frock coats of Col. John S. Mosby and Gen. Philip H. Sheridan loaned by the Smithsonian Institution were displayed along with paintings from the Museum’s own collection.

For the first time since that fateful day in 1863, the battle flags belonging to all but two regiments of Gen. George E. Pickett’s Virginia division were on display together. The exhibit also explored the role of the other regiments that participated in the charge at Gettysburg.

Virginia is for Lovers… And It Always Has Been

Wartime valentines and love letters from the Museum’s collection marked the 25th anniversary of the Commonwealth of Virginia’s famous advertising campaign.

Robert E. Lee led the Army of Northern Virginia under this St. Andrew Cross-patterned battle flag, the use of which is the hottest issue relating to the Civil War in modern media and truly defines the public perception of Confederate history today. This exhibition traced the flag’s evolution from its historical origins to its changing symbolism in postwar modern culture.

This display of unusual flag patterns included one for each Confederate state.

Views of the Confederate Experience

State, national, and unit flags from regiments, battalions, and companies of Virginia cavalry were on view.

This exhibition was the first ever, comprehensive exhibit on African and African-American life in the antebellum south. It utilized the latest research to explore the lives of this substantial element of the Confederate nation’s population. Underwritten by two grants by the National Endowment for the Humanities, the show brought national acclaim and the American Library Association named the companion book one of the outstanding nonfiction titles of 1991.

Designed as an accompaniment to the exhibition, this 200 page book provides a rich collection of essays, pictures and research. Purchase it online here.

Flags of the Western Theater

Selections from the Museum’s permanent collections illustrated the diversity of flags used by Confederate units fighting west of the Appalachians.

This display in the Museum’s flag gallery featured the wide variety of headquarters flags in the Museum collections.

This exhibit was a series of displays comparing the Confederate and Federal military items.

A Century of Collecting

A series of small displays featured relics, curiosities, miniature flags, sewing implements, and other items donated to the Museum early in its history.

Guests were introduced to the Confederate cabinet departments and secretaries.

Flags of the Confederacy

The inaugural exhibit in the newly-opened flag gallery highlighted the diversity of flag patterns.

The Confederate Image: Prints of the Lost Cause

This traveling exhibition of Confederate prints was based on the book of the same name by Mark E. Neely, Jr., Harold Holzer, and Gabor S. Boritt.

Victory In Defeat: Jefferson Davis and the Lost Cause

Supported by a grant from the National Endowment for the Humanities, this exhibit examined the role of the Jefferson Davis family in the Museum’s founding and early years.

A cooperative venture with the state sponsored exhibit, A Share of Honor: Virginia Women 1600-1945, this collection of objects evoked a strong sense of experiences of mourning in 19th century Virginia. Explore the traditions associated with women mourning their lost loved-ones.

Old Times Here: The South as Depicted in the Collections of the Valentine Museum and The Museum of the Confederacy

A semi-permanent exhibit, it featured highlights from the Museum’s collection of swords, revolvers, and long arms.

People of the Confederacy

This exhibit on artisans, yeoman farmers, planter aristocrats, merchants and manufacturers, slaves and free blacks, women, and soldiers was one of the first modern social history exhibits in a Southern history museum.