Waite Rawls’ May 12th “House 200” program on President Jefferson Davis’ military aides who occasionally worked at the Confederate executive mansion begs an obvious question: Was there any kind of guard – analogous to the U.S. Marine Security Guard stationed at the Washington White House – at the White House of the Confederacy? For most of the war, the surprising answer was “no.” 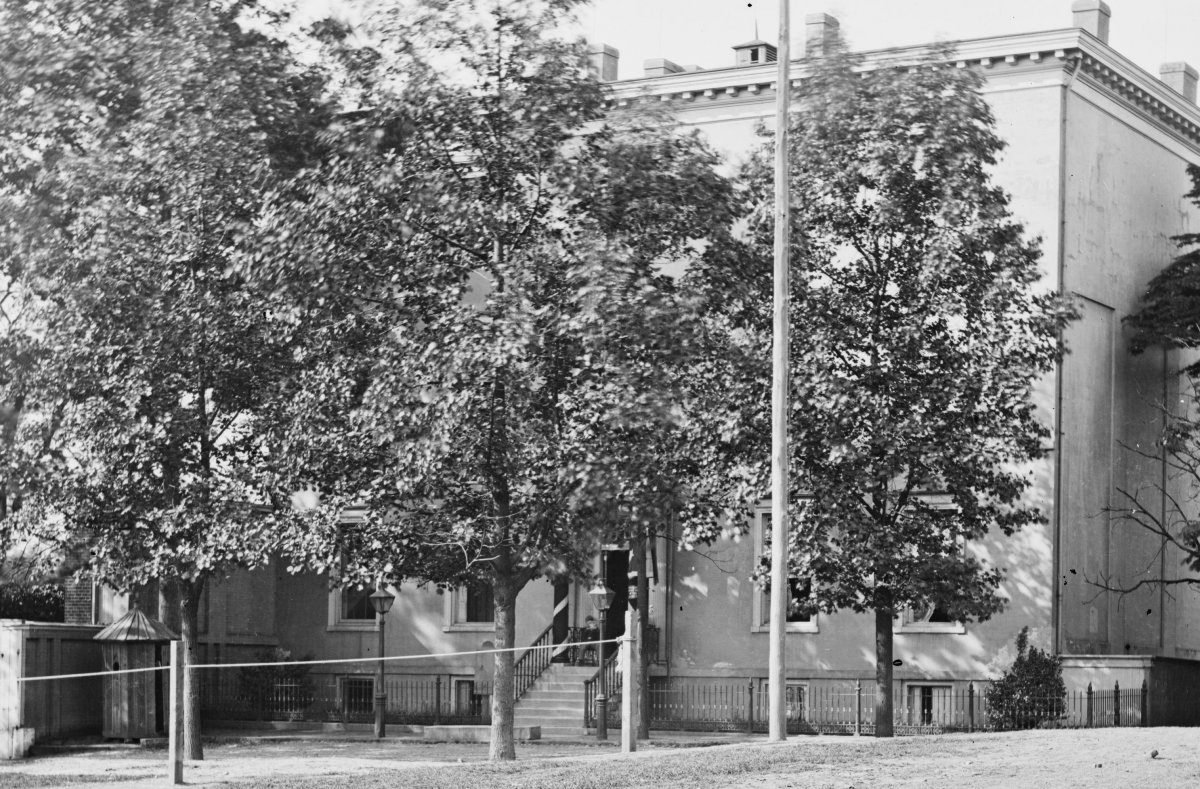 Visible at the lower left side of this April 1865 image of the White House (possibly taken by the firm of Mathew Brady) is a cylindrical guard house. This may have been one of the stations used by the Confederate President’s Guard – or it could have been the work of the Federal troops that took over the house weeks earlier. Courtesy of the Library of Congress Prints and Photographs Division.

Only in early February 1864 – perhaps not coincidentally two weeks after an arson attempt at the mansion – did the Confederate government station what was known formally as the President’s Guard. The commander’s report on a surviving muster roll details the unit’s history and purpose:

“This guard was organized by orders of Brigadier-General John H. Winder, in obedience to an order issued by the Secretary of War for the exclusive purpose of guarding the Executive Mansion. It is composed of disable-bodied men, detailed by General [Robert E.] Lee, for light duty. Its officers are disabled, each by the loss of an arm. It has four posts and requires a detail of one commissioned officer, two noncommissioned officers and twelve privates, daily.”

Captain William H. H. Coe, who commanded the Guard from March to November 1864, had lost his left arm at Gaines’ Mill in June 1862 while serving with the 40th Virginia Infantry.  His successor, Capt. Charles T. Huckstep, had been commander of the Fluvanna (Virginia) Artillery.

Over the past 30 years, White House interpreters have located the service records of men (all detailed to the Invalid Corps) who served in the Presidents’ Guard. Assisted by descendants of Guard members, the staff has compiled a roster of several dozen names.

In addition to an unpublished diary still in private hands, one published letter offers a sense of what it was like to guard the Confederate president. Private Joseph B. Watson, of Orr’s South Carolina Rifles, took the liberty of writing Jefferson Davis in 1884 to share happy memories of his service in the Guards.

“Well do I remember when on guard at your front door, during a cold night with sleet and snow, you came and asked me to take a cup of coffee, but was obliged to refuse it as I had never drank a cup of coffee in my life…. You noticed I had on no Overcoat, and asked if ‘The Guard’ had any. My answer being in the negative, in a short time we were called out by our captain to draw overcoats, furnished probably at your own expense.

“I also remember one night when after returning home from your office at a late hour with only your Private Sec. Mr. Burton Harrison, I believe you paced your room till almost day, and then came out at and spoke to me about the brave soldiers who were at the front with only scanty clothing and half rations to repel the enemy….I also remember Little Maggie as she came running and dancing down to our quarters, and Little Jeff with is little Confederate uniform that had a bright star on his collar, given him I believe by his uncle, of which he was so proud….”