In 1966, a group of prominent Richmonders turned thumbs down on a proposed statue by artist Salvador Dali that featured an allegorical depiction of hospital administrator Sally L. Tompkins resting on a 20-foot high model of the artist’s little finger. “The shocking and surreal Monument Avenue monument that got away,” as architectural historian Edwin Slipek described it, is a strange and entertaining footnote to an otherwise lost chapter in Richmond history.

Relating directly to our contemporary discussions about Monument Avenue, that lost chapter deserves its own bold headline:

ONE HUNDRED YEARS AFTER THE END OF THE CIVIL WAR, THE FORMER CAPITAL OF THE CONFEDERACY PASSED ON AN OFFICIAL PROPOSAL TO ADD SEVEN NEW CONFEDERATE STATUES TO MONUMENT AVENUE

A half-century ago, during the height of the Civil Rights Movement and in the waning years of white political rule, Richmond’s citizens discussed whether to add more Confederate statues to Monument Avenue or to diversify the people and history commemorated on the city’s most famous thoroughfare. The discussions resulted in no new statues, but, in retrospect, they offer insight into a city on the brink of major changes. 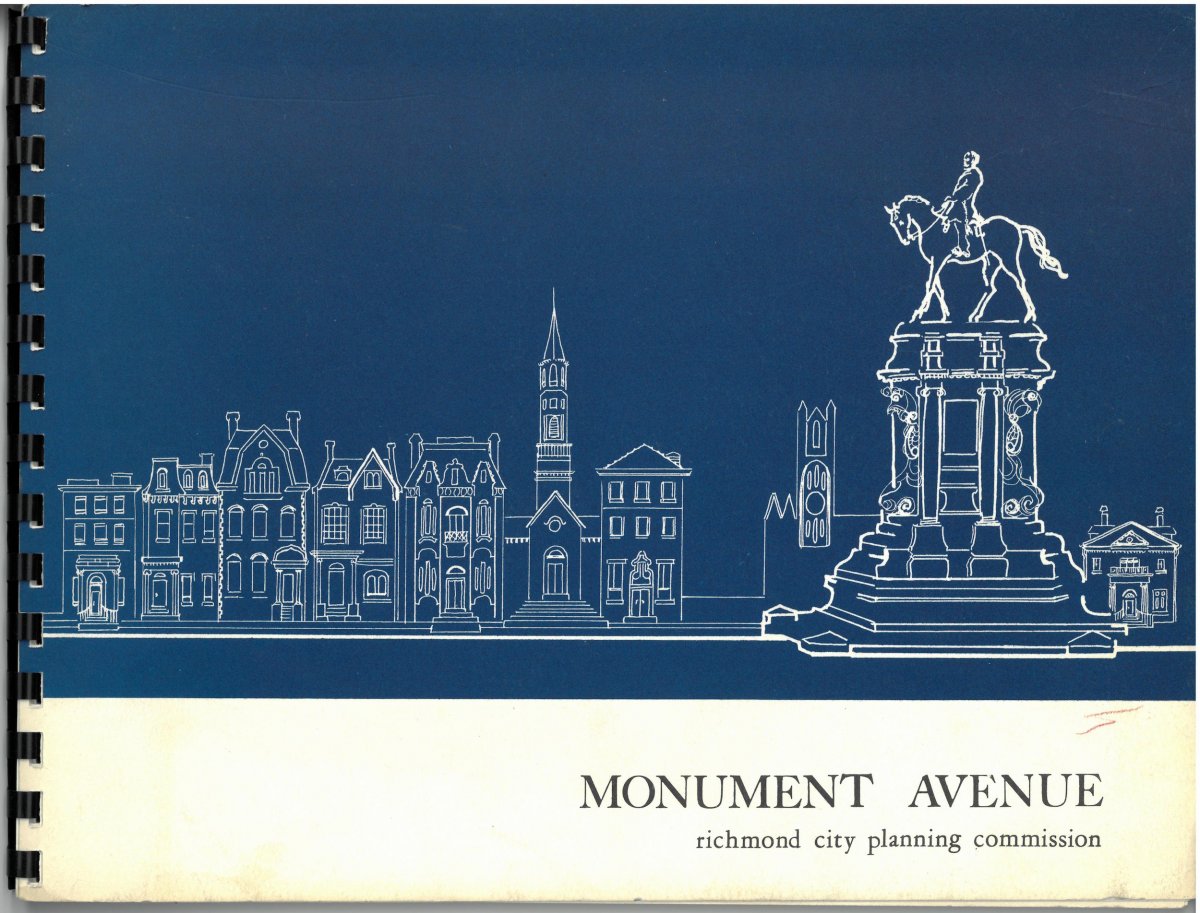 Prompting the discussion was a report, entitled “A DESIGN FOR MONUMENT AVENUE,” that the City Planning Commission issued in November 1965. (View more in our online exhibit.) The impetus for the study was the

growing perception that its miles-long westward extension had resulted in “new development patterns and neighborhoods which have eclipsed the prestige of Monument Avenue causing a certain relative decline in the use of the land.”

After offering a concise history of Monument Avenue and a critical evaluation of its present-day status, the report made detailed recommendations on how to restore and extend the avenue’s grandeur and make it more pedestrian friendly. It concluded with assurances that the recommendations would preserve tradition and build upon it.

The Commission report characterized the five existing monuments as “a bridge from the past into the present,” and proposed retaining them and adding seven more Confederate statues at locations specified in the report. “It is recommended that the theme of featuring prominent Confederate figures on 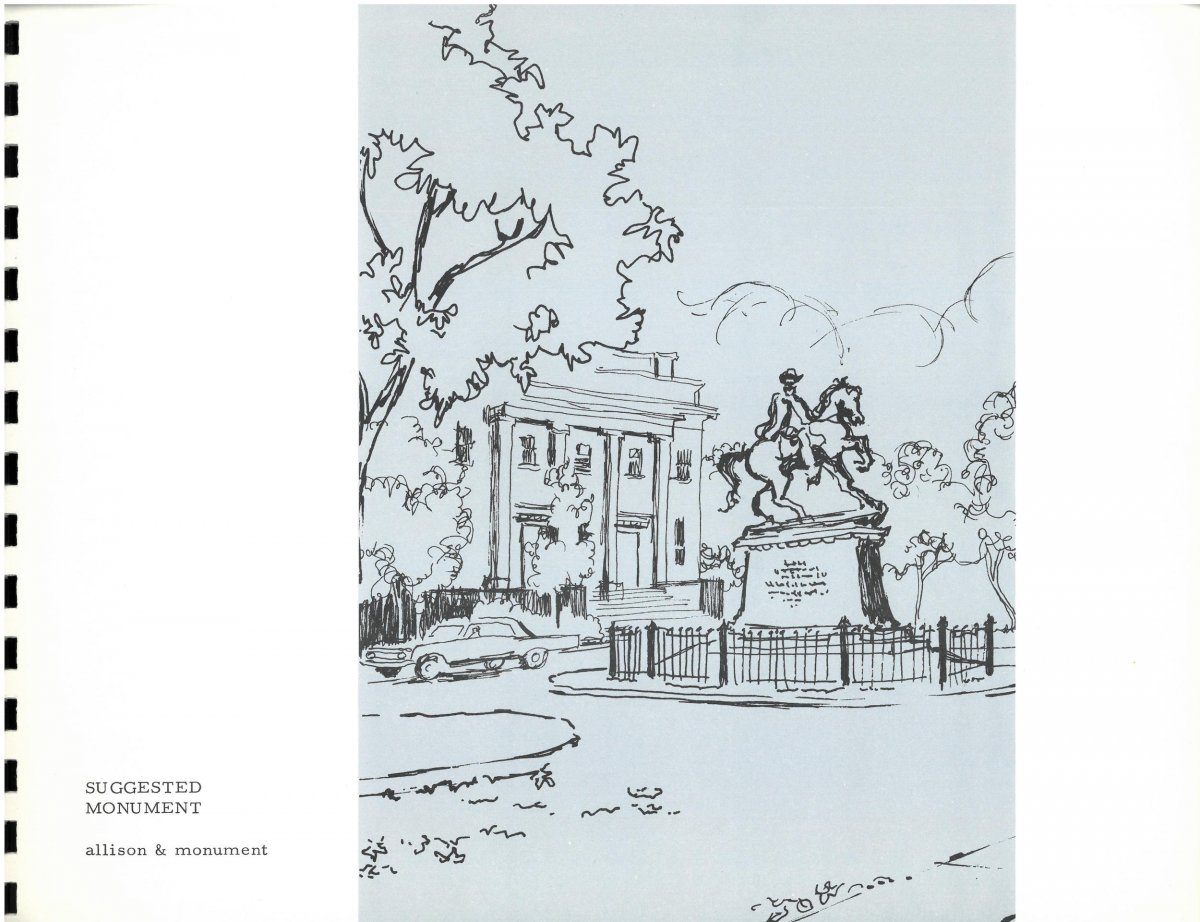 Monument Avenue adopted earlier in this century be continued [original emphasis],” the report stated matter-of-factly. The argument for this emphasis rested not on “Lost Cause” ideology, but on continuity and thematic coherence. “The impression will be more vivid in the minds of the public than a random assortment of figures, and the impact will have greater appeal to tourists.”

Significantly, the report did not event hint at who or what those seven new Confederate statues should depict. The sketch to the left is an example of an artist’s rendering for a new Confederate statue (who and what the monument would be didn’t matter) at an intersection. The Planning Commission left it to private citizens and groups to determine – and to pay for – any new statues. As it turned out, the only effort made was the aborted Sally Tompkins / Confederate women’s statue – underwritten as it was by the Reynolds family resources.

For the next several months, the public discussed the report and its recommendations. One suggestion was to move extant Confederate statues located elsewhere in the city to Monument Avenue – while acknowledging the practical difficulty of doing so. Others suggested names of Confederates who might warrant statues: Col. John S. Mosby, Lt. Gen. Joseph Johnston, Maj. Gen. George Pickett, Lt. Gen. James Longstreet – and Sally Tompkins.

Surprisingly, however, the tide of public opinion went strongly against the “Confederate emphasis” for a variety of opposing reasons.

“We yield to none in our reverence for the men who fought for the Confederacy, and who gave their all for a principle in which they believed,” the Richmond Times Dispatch editorialized. “But an attempt to put seven more Confederates on Monument avenue could be anticlimactic in the extreme.” There weren’t seven more Confederate subjects on par with the existing statues, the editors warned, so the effect would be to diminish Monument Avenue.

“Furthermore, it isn’t necessary,” the editors wrote. “There are great Virginians who have not been recognized at all.”  The RTD editors suggested as alternates Virginia-born presidents and Revolutionary War statesmen.

In letters to the editor and during a December 6 Planning Commission public hearing, those and other suggestions came to the fore. Among them were Virginia-born scientific and medical heroes Adm. Richard Evelyn Byrd and Dr. Walter Reed, and Virginia-born Union general George H. Thomas.

The Planning Commission heard several strong African-American voices. ‘Don’t maintain the Confederate theme; we feel that the spirit of Richmond at the present time should be reflected,” insisted attorney Henry L. Marsh III. “We have no objection to honoring true heroes and founding fathers, but we object to continuing the Confederate theme.” Marsh spoke as a representative of the NAACP; 12 years later, he became Richmond’s first black mayor.

‘The concept of the Confederate theme is out of order with the present time; let’s include some Northern generals to be fair, and perhaps some Negroes,” said Dr. J. Rupert Picott, an educator who was then executive secretary of an African-American teachers union.“’The existing monuments should be maintained, but this is a great city and must be greater. We must think of Richmond today, not as it was 100 years ago.”

It was not only African Americans who registered fundamental disapproval of continuing the Confederate emphasis.  A Richmond woman decried the “obsession” with the Civil War and asked rhetorically, “Was the Civil War the only time in which Virginians were courageous?” To make her point she quoted “a little song” that a friend had composed:

‘God rest you, bloody Civil War,
Let nothing you revive
Virginia’s doing all it can
To keep you still alive.”

Given Richmond’s identity as the former Confederate capital and a city obsessed with the Civil War and the Confederacy, the Planning Commission seemed on safe ground when it recommended continuing the “Confederate emphasis” on Monument Avenue. And, while many white Richmonders endorsed the Commission’s recommendation, the report had the ironic effect of revealing that many Richmonders thought it possible to have too much Confederate emphasis and that, perhaps, Monument Avenue should showcase a broader history.

Brian Black and Bryn Varley, “Contesting the Sacred: Preservation and Meaning on Richmond’s Monument Avenue,” in Monuments to the Lost Cause: Women, Art and the Landscapes of Southern Memory, edited by Cynthia Mills and Pamela H. Simpson. Knoxville: University of Tennessee Press, 2003, pp. 234-250.