The immersive short-film A People’s Contest: America’s Civil War & Emancipation is an indispensable part of the visitor experience designed to inspire an understanding of the motivational causes, course, and consequences of the American Civil War. 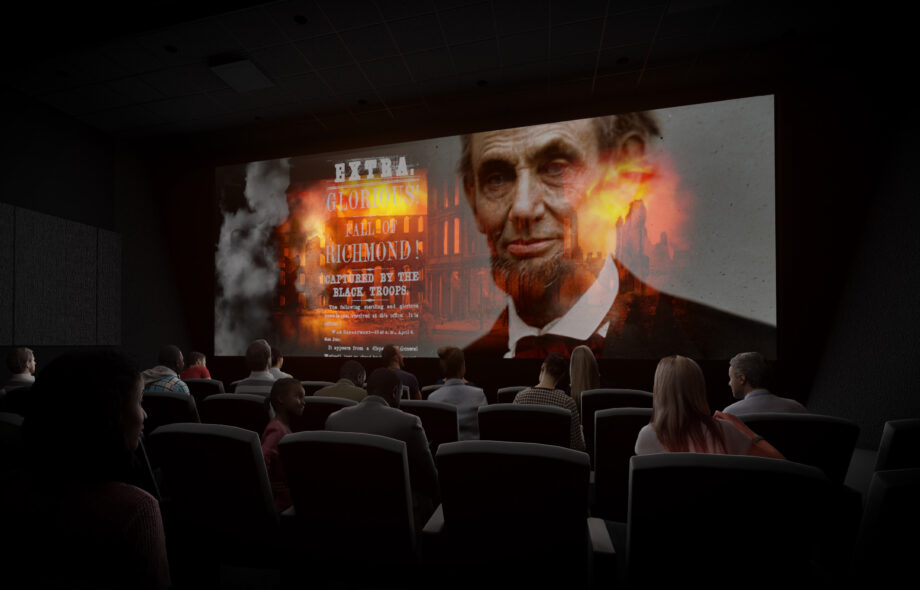 We look forward to welcoming visitors to this amazing film experience just weeks away at our Tredegar location.
(Tickets are included with Museum admission)

Daily showings of the original film “A People’s Contest: America’s Civil War and Emancipation” will be available to ACWM visitors as part of their museum experience.

The Robins Theater space, designed by Solid Light, Inc. is equipped with state-of-the-art technology in video and audio components. The latest technology is utilized to support the dramatic visuals of the film, immersing the audience in the Civil War era. The theater itself adds a modern multi-use space for programs, performances, or lectures.

During Museum hours, visitors will have the opportunity to view the original film “A People’s Contest: America’s Civil War and Emancipation”, which is just under thirteen minutes in length. This film was developed to inspire an understanding of the motivational causes, course, and consequences of the War, and compliments the ACWM flagship exhibit, A People’s Contest: Struggles for Nation & Freedom in Civil War America.

With an original script and musical score, the film reflects themes of the Museum’s flagship exhibit by presenting distinctive and unexpected elements.

The American Civil War Museum explores the stories of the American Civil War and its legacies from the perspectives of soldiers and civilians, and free and enslaved African Americans.  Through dynamic exhibits and an unparalleled collection of Civil War era artifacts, the Museum seeks to show the parallels between history and current culture.

Here’s a sneak peak of the Robins theater

Check back for updates as we move closer to the opening!