The White House of the Confederacy turns 200 this year, so what better time to take a look back at the design and architecture of the house? In two posts below, Museum historian John Coski shares research findings by Museum employees and graduate students from the 1990s, and architectural historian Edwin Slipek suggests a brand new theory.

Who Designed the “White House of the Confederacy”?

Famous houses have famous architects.  Or if they don’t, they should.

That line of thinking underlay the long-held belief that the “Brockenbrough House” at 12th and Clay streets in Richmond’s affluent Court End neighborhood – a building known best to history as “the White House of the Confederacy” – was the work of one of America’s most famous early neo-classical architects, Robert Mills. The attribution originated with architectural historian Fiske Kimball’s 1922 Domestic Architecture of the American Colonies and of the Early Republic, and was based on a surviving letter from the house’s original owner, Dr. John Brockenbrough, to Mills. Several Mills biographies and monographs, the Museum’s own promotional literature, and the National Historic Landmark register nomination endorsed the attribution.

Architectural historian, Dr. Richard C. Cote, who was the curator of the White House between 1987 and 1990, and who oversaw the completion of the house’s restoration, was skeptical of the attribution. Cote summarized his viewpoint in the 1993 book, White House of the Confederacy: An Illustrated History:

“Unfortunately, the identities of the architect and the builder of the Brockenbrough residence are unknown. For many years architectural historians attributed the house to Robert Mills, a prominent American neo-classical architect. From 1812 to 1814 Mills worked with John Brockenbrough’s city building committee in the erection of Monumental Church on the site of the Richmond Theater fire. Documentation has never been found, however, to confirm or deny the Mills attribution. At the time the house was under construction, Richmond’s own building community could have supplied the talent to execute the stylish Clay Street residence.”

During the years that Mills was involved with the Monumental Church project, he and Brockenbrough worked closely together. “Mrs. Brockenbrough & the Doctor have been as usual very kind,” Mills wrote to his wife in December 1812, “they are frequently in our family.”

But, as Dr. Cote cautioned, evidence of a close professional and personal relationship does not prove that Mills designed Brockenbrough’s house. With no surviving architectural plans or any other documentary “smoking gun,” the Mills attribution must rely on circumstantial evidence and on analysis of the house itself. Intrigued by the mystery of who designed the house, two museum employees who led tours of the White House in the 1990s helped resurrect and strengthen the case for Robert Mills.

In a 1995 while researching a Virginia Commonwealth University seminar paper, White House interpreter Sandra Hubbard discovered several important new pieces of documentary evidence. An entry in Mills’ account book noted that Brockenbrough and Mills dined together on March 15, 1816. A month later Mills “enclosed a draft on Brockenbrough for $300” in a letter to his brother.  Mills sent that letter a few weeks after John Brockenbrough bought the first parcel of land on which he soon built his new house. The amount ($300) was an appropriate fee for a major architectural commission.

Another graduate student in the VCU School of the Arts, Korene G. O. Wilbanks, wrote her 1999 M.A. thesis on “Robert Mills and the Brockenbrough House, Richmond, Virginia, 1817-1822.”  In addition to mustering the accumulated circumstantial documentary evidence, Wilbanks analyzed the house itself and compared its features with known Mills designs. Her work benefited from the 1987-1988 architectural investigation by Paul Buchanan and Charles Phillips (overseen by Richard Cote) which discovered that several features of the house, once thought to be part of the original design, were in fact later modifications.

Wilbanks identified nine characteristics of the Brockenbrough house that “correspond to the architectural style of [Thomas] Jefferson, [Benjamin Henry] Latrobe, and most significantly [Robert] Mills.” Those features (quoting below from her thesis) were:

Mills used those characteristics in his other works, leading Wilbanks to conclude that Robert Mills was the architect of what became the White House of the Confederacy.

Caution and prudence suggests that the Mills attribution should bear an asterisk, but Wilbanks’ thesis makes a strong case that the famous old house at 12th and Clay streets was the work of one of America’s first famous architects.

The Mysterious Architectural Origins of the White House of the Confederacy

The three-story (four with full basement) structure at 1201 E. Clay St. in Richmond’s Court End neighborhood is not only one of Virginia’s, but one of the nation’s most historic buildings. It was from this address that Jefferson Davis governed the newly-formed Confederate States of America from 1861 to 1865. Those four years were tumultuous from an economic, political, military, racial and social standpoint. The loss of life was overwhelming. And the repercussions of the Civil War continue to frame the direction of American life today.

It is therefore unsurprising that architectural studies of this neo-classical residence, built in 1818, have taken a backseat to examinations of the social and political aspects of the residence. The story of the house is further enriched and complicated by the fact that it has, like a cat, had many lives. It was built by Dr. John Brockenbrough and passed to four other prominent owners even before it became the White House of the Confederacy. After the war it served as a public school.

By the late 19th century, and on the verge of demolition, it was saved through the efforts of determined southerners and became the Confederate Memorial Literary Society. Best practices in museum management by the late 20th century guided the museum to broaden its scope and separate its extensive museum and library holdings from the aging residence and place them in a modern facility. This move allowed the historic house, now furnished to its early 1860s appearance, to be interpreted as an evocative link to the Davis family who inhabited it in particular, and the Confederate years in general.

But what of the origins of the house itself, and especially the question of who designed it?

The popular and easy answer for generations has been South Carolina native Robert Mills (1781-1855). It has been convenient– and almost easy– to claim the mantle of this talented, ambitious and important architect. True, Mills was designing the Monumental Church in Richmond and Brockenbrough was chairman of the building committee at the same time the Brockenbroughs were setting out to build a second home on Clay Street. And yes, it is documented that in March 1816, Mills and Brockenbrough dined privately. How could Mills not have been the architect?

The answer is simple. There were many other things afoot architecturally in Richmond at the time. And these involved at least three other of the new nation’s most prominent architects. Frenchman Maximilian Godefroy (1765-1838) who was in Richmond ensconced in the Capitol, landscaping the grounds and improving the statehouse itself. Alexander Parrish (1780-1852), a New England architect, still held sway as the architect of the Executive Mansion and the John Wickham House (located a block from the proposed Brockenbrough house). And finally, B. Henry Latrobe (1764-1820), the talented British architect who had become something of a fixture in Virginia power circles, was hovering over, and injecting himself, into many important architectural projects.

A name never mentioned as a factor in the architectural origins story of the White House of the Confederacy is that of Gabriella Harvie Randolph Brockenbrough (1772-1851). John’s Brockenbrough’s wife was young, wealthy and from all accounts, tremendously smart and talented. Plus, she knew architecture.

Consider: her father was John Harvie, a sophisticated gentleman who commissioned Latrobe to design him a striking villa on what is today Gamble’s Hill at the foot of South Fourth Street. At that time she was already married to Thomas Mann Randolph, the owner of Tuckahoe plantation and a cousin of Thomas Jefferson, the nation’s leading amateur architect.

Upon Randolph’s death, and still in her twenties, Gabriela inherited and managed Tuckahoe. At this time, Latrobe, already a friend and himself a young widower, attempted to court Gabriela. But she looked him over and became the wife of John Brockenbrough. Together they built a striking house at the intersection of Clay and 11th streets and soon thereafter the house at Clay and 12th.

The footprint and scale of the second Brockenbrough house has much in common with Latrobe’s design on Gamble’s Hill for Gabriella’s father. And John Brockenbrough on more than one occasion seems to have encouraged Latrobe to jump into local architectural battles that Robert Mills was winning.

Could Gabriella Brockenbrough have been the designer of the house at 1201 East Clay, with B. Henry Latrobe whispering in her ear?

Editor’s note: Mr. Slipek expanded on this hypothesis in his lecture and tour of the house on February 2, 2018. You can watch video from that presentation here: 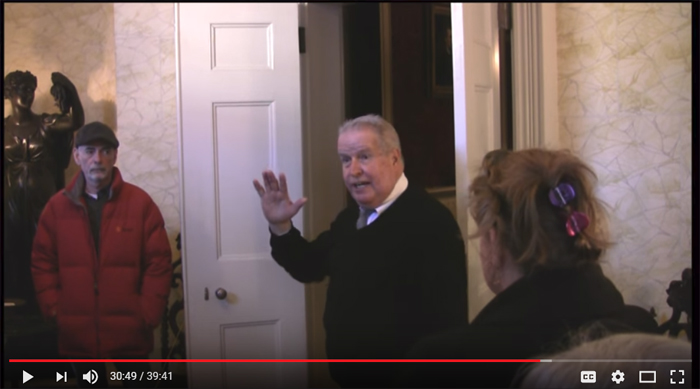