The first photos and detailed descriptions of the building known to history as the White House of the Confederacy come from the days immediately following the end of Confederate Richmond, and owe to its “Yankee” conquerors. The handful of exterior photos and the judgmental descriptions of the public rooms, used in conjunction with Varina Davis’ postwar recollections of the floor and room arrangements provided the broad outline for restoring the home to its wartime appearance.

But the house at 12th and Clay streets – known primarily throughout the antebellum era as the “Brockenbrough House” after its builder – was already 43-years old when it became the Confederacy’s executive mansion in August 1861. Is there any way of knowing what the house looked like or what it changes it underwent before 1861?

We’ll likely never have a detailed answer to that question, but generations of the Museum’s curators and architectural historians have been able to glean an overall impression from careful and critical analysis of the house’s fabric (such as original woodwork, wall, paint, and wall coverings) and from an important documentary source.

The “Mutual Assurance Society, against Fire on Buildings, of the State of Virginia” was incorporated in 1794 and quickly became a primary insurer of homes and businesses in Richmond and beyond. Its records reveal not only ownership and value of properties (information available in deeds and property tax records), but diagrams of primary and secondary structures.

The records of the Mutual Assurance Society survive, are housed at the Library of Virginia and portions of them are available online.

Because the original builder and subsequent pre-war owners of the future White House of the Confederacy insured it through the Mutual Assurance Society, we can trace the general evolution of the property.

The first policy that Dr. John Brockenbrough took out for his new house at the corner of 12th and Clay Streets (he was then living at the northwest corner of 11th and Clay St.) was dated January 1, 1818. “A Dwelling hse. Walls of Brick __ feet by __ feet 2 ½ stories high covered with slate” was insured for $7,000.

He revised the policy seven months later to account for progress made in what was obviously on ongoing building project. “[M]y two buildings on the south side of K St. corner of 12th street, in the City of Richmond now occupied by no person, but intended to be occupied by myself.” He insured the dwelling house for $20,000 and a new servants’ house for $800. The accompanying sketch of the property described that servants’ house as “A kitchen & Dwelling walls of Brick __ feet by __ feet cov[ere]d with wood” and clarified further that it was not within 30 feet of the main dwelling. 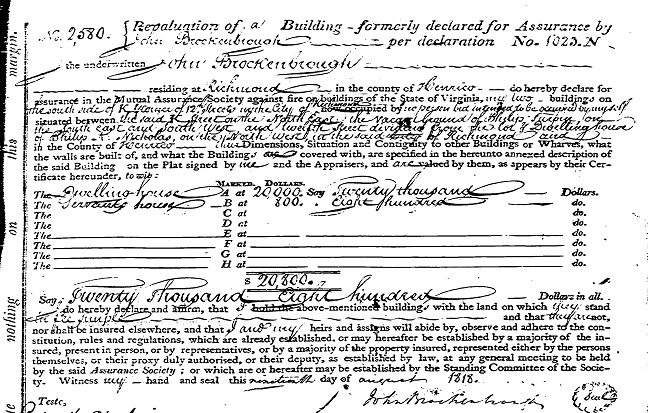 John Brockenbrough’s August 1818 policy for his property at 12th and Clay streets shows a dependency and his recently occupied dwelling house, still without the grand south portico that showed up on the policy he took out in 1822.

The 1822 policy specified the house’s dimensions (67’ x 52’), noted that the brick walls were “plastered out,” and that the house now boasted a columned portico on its south side. The smaller building, now characterized as a one-story “Dwelling house” similarly boasted a porch fronting on 13th St., and was insured for $1,000.

Brockenbrough later re-evaluated his property and insured it for a lower amount ($16,500), and the man who bought the house from him in 1844 reduced the insured value to $14,300.

But the 1844 insurance policy drawing reveals that James Morson added five other (apparently uninsured) brick and slate roof structures contiguous to the main dwelling house.  Other documents and later photographs show those structures to be stables, carriage house, and curtain wall. The policy described the other dwelling house as a “Gardener’s house.”

The last of the Mutual Assurance policies for the house, taken out in 1851 by James A. and Sarah B. Seddon, who had purchased it from Sarah’s brother, James Morson, in 1845, suggests a change in the house’s roof from slate to tin.

Although the Mutual Assurance Society policies do not provide many details that we would like to know about the “Brockenbrough House,” they do provide the best surviving documentation of the building’s and the property’s overall appearance. The Mutual Assurance Society collection overall allows historians to virtually reconstruct large parts of 19th-century Richmond and other Virginia cities and towns. 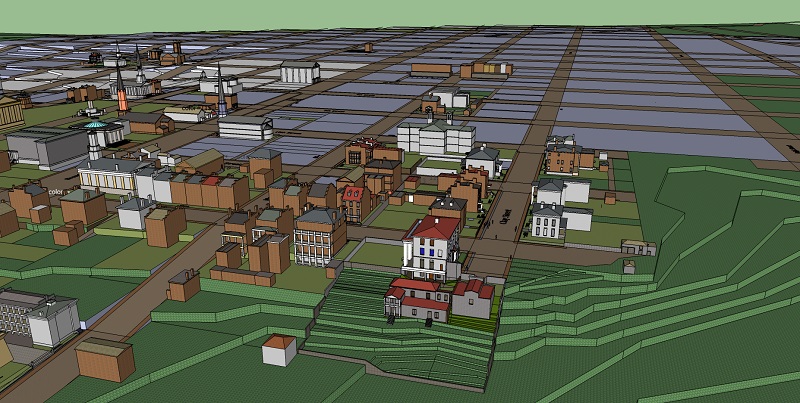 The Mutual Assurance Society policies were among the indispensable sources for the virtual 3-D map of wartime Richmond created by former Museum staff member Eric App.