“Heritage, not Hate” is the familiar bumper sticker defense of the Confederate flag. It has evoked equally pithy responses, such as “Your Heritage is Hate” and “Heritage of Hate.”

A symbol derives meaning from its uses and the perceptions of those uses. In the 156+ years since its introduction, the Confederate flag – or, more accurately, modern reproductions and graphic representations of the flag – have had many uses and acquired many different meanings. Understanding the complex history of the flag is essential for understanding the debates about the flag today. 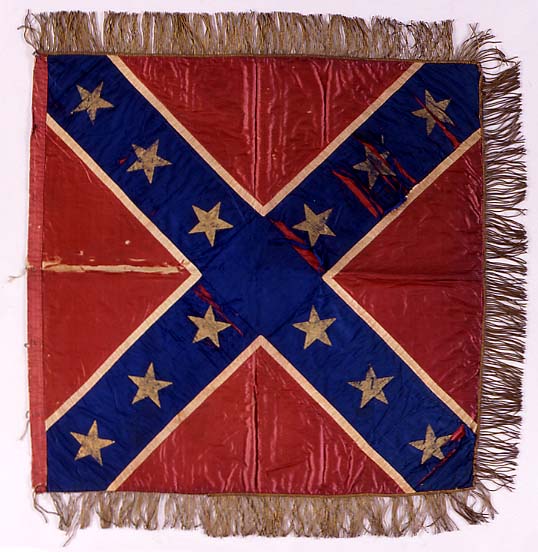 What we today call “the Confederate flag” (the star-studded blue diagonal cross on a field of red) was born as the battle flag of what became Gen. Robert E. Lee’s Army of Northern Virginia. Original wartime battle flags, therefore, are associated with the Confederate soldiers who carried them in battle.

The implicit link between soldiers and the nation that their service supported became explicit in May 1863 when the Confederate Congress approved a new national flag featuring the Army of Northern Virginia (ANV) battle flag. The soldier’s flag was also a political flag, associated with the independence of a nation dedicated (by the terms of its Constitution) to the defense and perpetuation of slavery.

In the decades after the death of the Confederacy itself, its flags – especially its most prominent battle flag – lived on.

The ANV battle flag became the logo of the United Confederate Veterans and, later, the Sons of Confederate Veterans. The battle flag was ubiquitous in Memorial Day observations, monument dedication ceremonies, and veterans’ parades throughout the long era (1880s-World War II) in which commemoration and celebration of the Confederacy and Confederate soldiers and leaders was an important part of white Southern public life. Confederate heritage organizations effectively owned the flag and controlled its meaning.

Even before World War II, cracks were evident in the foundation of the flag’s status as a symbol of heritage. Occasional northern and African-American voices questioned the wisdom of displaying a flag they associated with disunity or treason. And young white southerners began using the flag in distinctly non-memorial ways as a symbol of regional identity.

The growing battle over the post-Reconstruction South’s established racial order of Jim Crow segregation resurrected the Confederate flag’s use as a political symbol.

Supporters of the States Right Party (aka the Dixiecrats) in 1948 embraced the flag as a symbol of support for segregation. Although the Dixiecrats emphasized Constitutional principal, “states rights” in the 1940s and 1950s translated, as it had in the 1860s, into the purposeful denial of fundamental human and civil rights for African Americans.

The explicit use of the Confederate flag as a symbol of segregation became more widespread and more violent after the U.S. Supreme Court’s Brown v. Board of Education decision. Southern states resisting federally-mandated integration incorporated the flag into their official symbolism.

During the same period, between the early 1950s and late 1970s, the battle flag enjoyed (and suffered from) a short-lived, but intense, nationwide fad, and became a widely used popular culture symbol. Confederate heritage groups protested and southern politicians legislated in vain against “desecration” when the flag assumed new meanings as a trivialized symbol of rebellion, of rednecks, “good ol’ boys,” and southern rock music.

“Heritage” or “Hate”? Different people at different times have used the Confederate flag as a symbol of both – and of other things. Trying to reduce the flag to a single meaning distorts the flag’s history and ignores the very real influence that history has had on perceptions and meanings.